LOTS to look forward to.

I've just booked up a couple of events recently and just thought I ought to take stock of what we have now got planned, rescheduled, organised for next year. 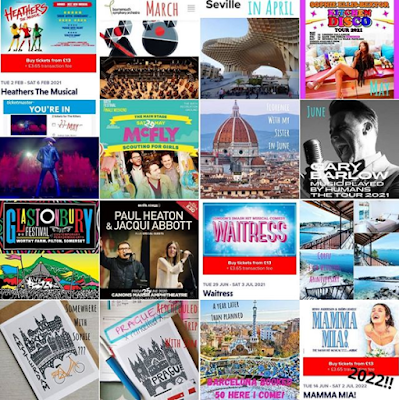 EVERYTHING got cancelled this year, the year Sam turned 18, Sophie will celebrate her 21st and me my 50th!! And next year Jeff and I will celebrate our 25th Wedding Anniversary. We had lots planned and of course whilst we completely understand the reasons why, it has been sad to see everything cancelled. 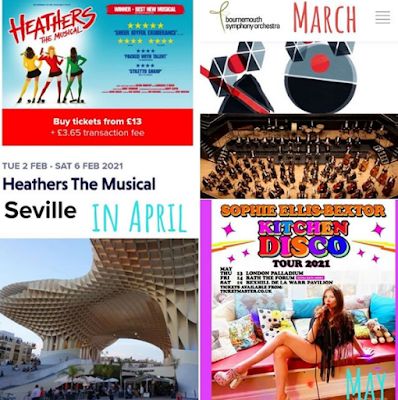 I'm still very uncertain whether these earlier events will still be able to take place next year. The theatre has had no support and is just not 'socially distanced' friendly. The same goes for the Bournemouth Symphony Orchestra, which we booked up for Jeff's birthday last year. After loving 'Love Actually' with a live orchestra, we booked to see the Bournemouth Symphony Orchestra play themes from the movies. It's just in Bath and I'm sure if unable to go ahead, will be rescheduled again.
SEVILLE we hope stands a chance of happening, although cases in Spain have been high throughout. We had to take flight vouchers for our Summer holiday, because we cancelled just in case the flights still had to go ahead, even though we weren't prepared to travel, so we booked Seville to use the vouchers. And Sophie Ellis Bextor is a treat to me!! I booked two tickets last night for either my sister or Jeff. I loved her when I saw her last year and tuned into her Friday night kitchen disco throughout lockdown, so as she's playing in Bath, I got tickets! 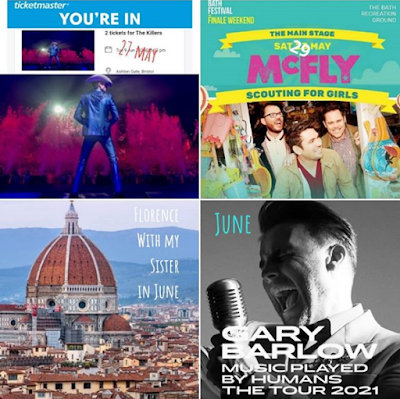 The Killers and McFly/Scouting for Girls have carried over from this year and my trip to Florence with my sister now moves into June, as half term falls then. This was the big disappointment from everything being cancelled. We have ended up getting cheaper flights though and the hotel honoured our booking and carried it over, so we've booked an extra day!! Gary? Well he's just announced his tour and hopefully Sophie might be able to move to Cardiff by then, as that's where the tickets are for... 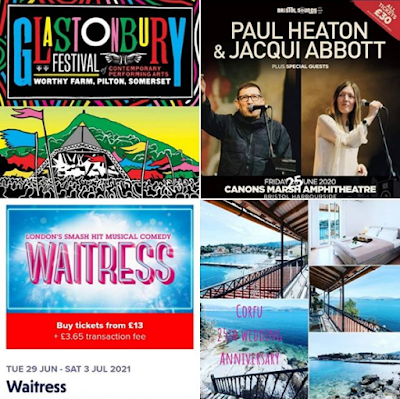 I'm not going to Glastonbury, the boys are! Sam's first time, so I hope it will happen, although there is still a big ? over whether it will go ahead. I really hope Paul Heaton and Jacqui Abbott can happen too, they were great when my sister and I saw them before.
We changed our plans for the summer. Initially the owner of the villa we booked with this year in Majorca, was happy to carry our booking over but when we tried to finalise dates, she decided to cancel and gave us a full refund. To be fair, we had always planned to return to Greece the summer of 2021 to celebrate our 25th Wedding Anniversary, just Jeff and I, as it's the first place we holidayed together. We've gone ahead and booked it all, with full cancellation policies and flights with TUI and I guess it can roll over by another year if things don't change. 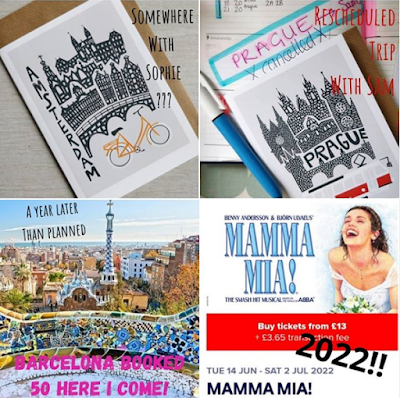 Somehow, at some point we have to fit in two more trips. Sam and I had been going to Prague in September for his 18th but that of course got cancelled. We're still keen to do it but can be reasonably flexible when we go, as Sam is on a zero hours contract and I just need to take one day of holiday, to get 5 days off together. Sophie's 21st trip to a European city isn't happening either. We had considered Amsterdam or Lisbon or Athens, then closer to home, either Brighton or Edinburgh but the way things are going we could be spending it at home!! So she finishes her Placement Year in September next year, a couple of weeks before her final year at Uni starts, so I've booked a couple of days off to fit in a trip 'somewhere'!!!
Barcelona for my 50th isn't happening, flights have been cancelled but we hope to plan it in for October half term next year or possibly Spring 2022! It's odd thinking that far ahead but our Mamma Mia tickets have been rescheduled for June 2022!! 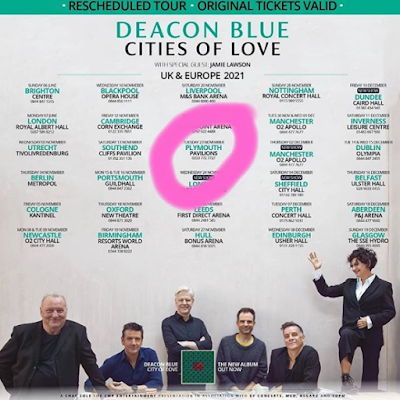 And finally, the only show we think we'll have to get our money back for, Deacon Blue. It had been scheduled perfectly, on my actual 50th birthday. Jeff had organised to finish work a little earlier, we had planned to stay overnight in Plymouth and enjoy my birthday weekend but it's now been booked for a Tuesday night, when originally it had been a Saturday.There's no way Jeff can be in Plymouth on a Tuesday night in term time, so it looks like that one will have to go sadly.
Obviously all this could change, get cancelled, postponed, rescheduled..... we have no idea how things will pan out for the foreseeable future. I'm a terribly organised person. I like to know what I'm doing, when I'm doing it, plan it, save for it, look forward to it. I have to book my holiday on a rolling year, so I do have to have some idea about what's happening in the year ahead, particularly if I want a specific date. Knowing I have all this to look forward to is keeping me going, even if ultimately everything shifts again, it's still there to look forward to.
I know I am very lucky to have all of this planned. Jeff and I don't drink, don't smoke, don't buy designer stuff, don't own an expensive car, hardly ever go out for meals etc Instead we like to see live music, live theatre, visit places on a cheap budget, that way we get to do more! The older I get, the more I want to travel, see places, enjoy live music and theatre, make memories rather than have things!
Posted by dots and spots at 11:17

I am in the same boat, but have been luckier than you in that most of my reschedules have now changed to Saturday nights which is good luck. The only one is Les Mis, which should have been Easter half term is now not in a holiday, but I owed lots of time off, so that will be a cheeky mid week day off. At least 2021 should be very cheap, as they are all already paid for....