Paris - you were everything I hoped you'd be and more! 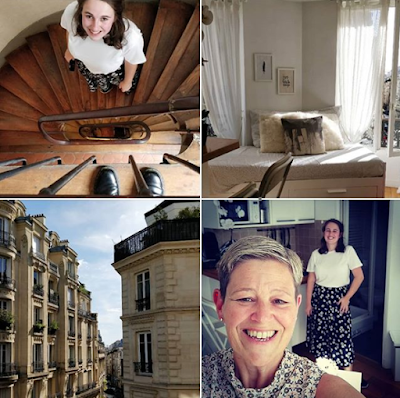 Sophie and I are just back from the best little trip to Paris. We went by train from Castle Cary to London Paddington, tubed it to St Pancras, where we got the Eurostar to Paris. Metro'd it to our AirBnB in Pigalle, unbeknown to us, in the Red Light District!!! but that didn't matter. We felt completely safe and in a great location to explore Paris. To say our AirBnB was tiny would be an understatement but it was perfectly fine for us and we had always set out to do the trip on a student budget, so you get what you pay for, a bed for the night, shower, nice and clean and central to explore. 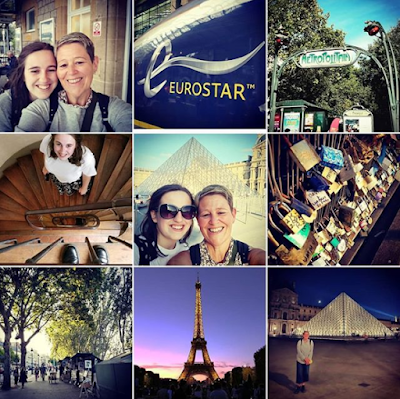 We only arrived in Paris at 4pm but once we'd found our apartment we headed off on the Metro to the Louvre. It's closed on a Tuesday, so the best day to photograph the glass pyramid without the queueing crowds. We then went in search of the Pont des Art - the bridge of locks but it is no more. The bridge started to collapse from the weight of the locks, so sadly they've now been removed. We walked along the river Seine on our way to the Eiffel Tower. One of the things we wanted to see was the Eiffel tower at night, lit up and so we headed there as the sun set and watched her light up, sparkling on the hour, every hour for 5 minutes - a magical sight. We then headed back to the Louvre to see that lit up too. Day one complete, already walked miles and exhausted. 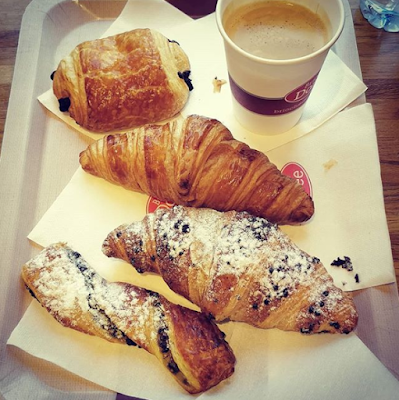 Day two and first thing breakfast - pastries and coffee for less than 10 euros!
Best way to start any day! 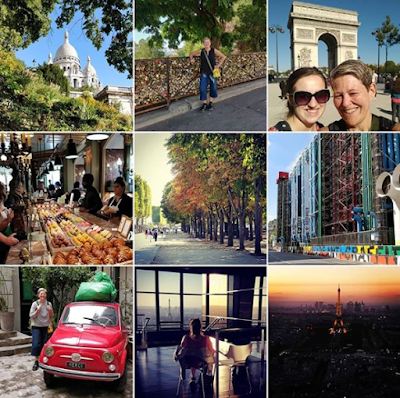 So day two was jam packed again. We headed up to the Sacre Coeur first thing - got there early to avoid the crowds. We were so lucky with the weather, the white buildings of the Basilica shone out against the most perfect blue sky and we had fantastic clear views across the city. The Arc de Triomphe was next, so busy and hot! We decided to not go up it but instead walk the full length of the Champs Elysee and enjoy the sunshine....... 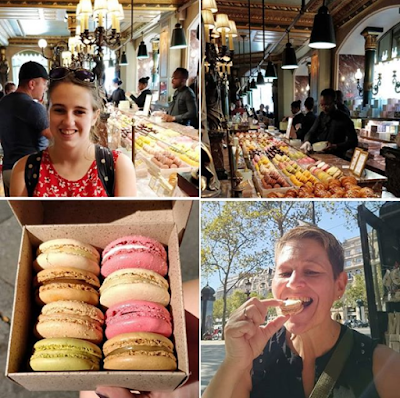 .......stopping off at Laduree, the home of the macarons half way down.
What a treat!
She made me do it!!

We couldn't of asked for better weather, lovely autumnal feel, warm sunny days but not too hot.
We spent the afternoon at the Centre Pompidou, there was a great viewing platform on the top floor. Sophie wasn't so keen on the actual galleries, to be fair there wasn't that much 'famous' art in there, things she would have recognised. We then spent the afternoon wandering the streets of the 'fashionable' Le Marais, the Jewish and Gay quarter. It was lovely, a lot less touristy, ending up at Merci a trendy and VERY expensive shop I'd seen many a time of Instagram! Too expensive to even buy a tote bag though! Our final destination was Montparnasse, the tallest building in Paris! 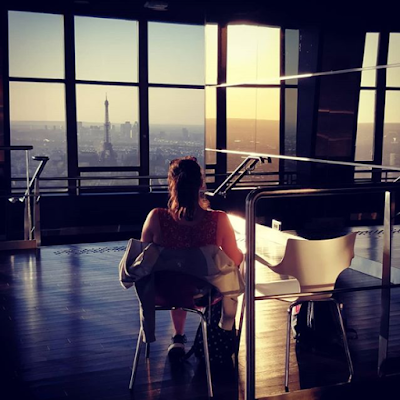 Sophie and I couldn't believe how quiet it was, for a good 30 mins or more we had this viewing area pretty much to ourselves, so we made ourselves comfortable and watched the sun set over Paris. 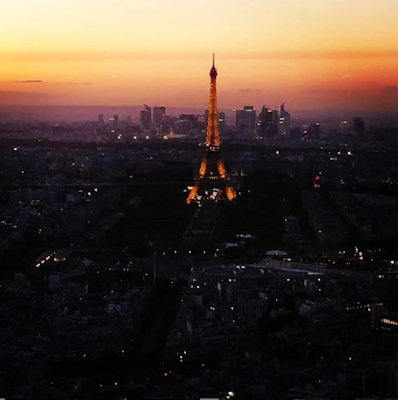 And stayed a little longer to see the Eiffel tower light up too, a highlight for us both.
Ending both days with a fabulous view of the tower. 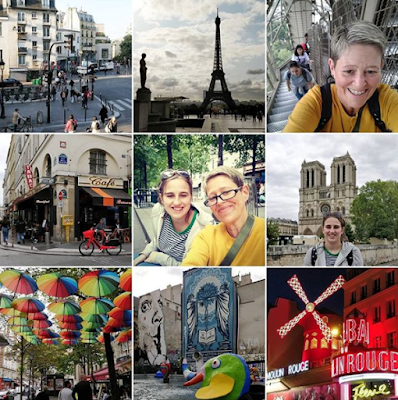 Day 3 was all about the Eiffel Tower again, this time actually climbing up it!
First thing after breakfast, we wandered around Pigalle where we were staying, then metro'd it over to the Tower, arriving from the other side of the river. We had intended to go on a river boat cruise later in the day but decided for the money, we wouldn't actually see much more than we had already done, so decided to give it a miss. Our pre booked tickets to climb the tower were at 12:00 but they let us up earlier. 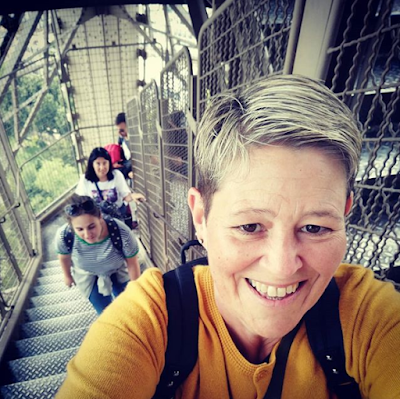 We did question why we'd decided to climb the 674 steps up the Eiffel Tower, rather than go in the lift but once we started climbing it was fine and we had no choice anyway! The views of the city were great again, but we had been spoilt the night before watching the sunset from the top of Montparnasse. It's funny I'd remembered it completely differently from my visit 27 yrs ago but someone did say how it had changed due to extra security and the large paved area I'd remembered, is now the park area under the tower. 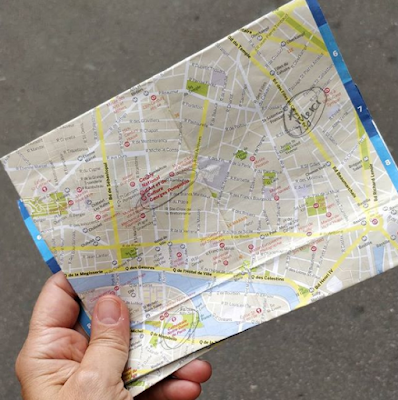 I know life is easier with mobile phones but I still preferred my trusty map to get us around, my father would've been proud of me (he worked for the Ordnance Survey making maps!) We decided to head back to Hotel de Ville for lunch, an area near the Pompidou we'd stumbled upon the day before. Perfect stop and busy corner street cafe for a coffee, before walking to Notre Dame, not that we could see a lot of it due to the renovation work being done after the fire. There was a lot of restoration work going on, arches being supported etc but it will be many years before you will be able to view it in it's full former glory again. 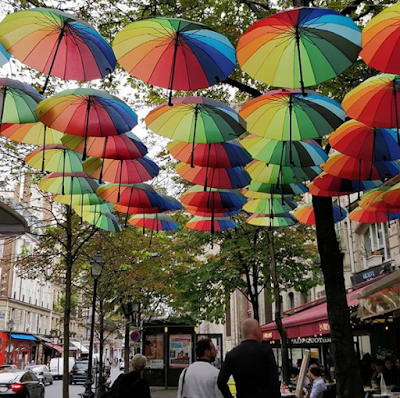 With no agenda for the rest of the day, after deciding not to do the river cruise, we just wandered back around Le Marias, ending up back around the Pompidou where we decided to have tea, discovering the fountains around the back. Knackered, we headed back to our apartment to recharge, pack and then headed out in Pigalle to see the Moulin Rouge all lit up and wander around the back streets of Montmartre, before crashing, day three done!  I think you can say we made the most of our time here. 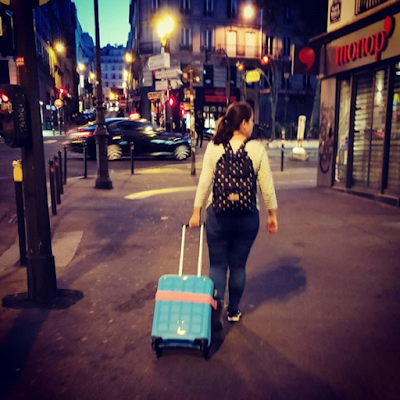 6:00am alarm on Friday morning, up and out before our local Patisserie had even opened. Metro'd it back to the Gard du Nord, another place that was exactly how I'd remembered it and coffee! A much needed coffee, before we boarded our Eurostar train back to London! 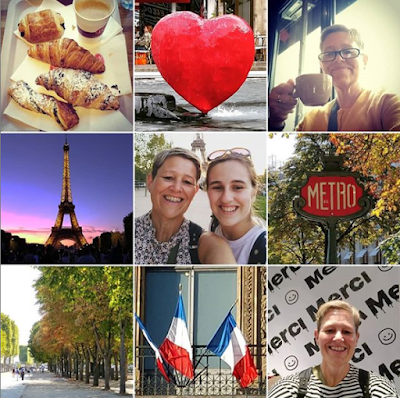 We had the best time!
It was lovely to explore Paris with Sophie, a place I'd last visited 27 years ago as a student, just like her. We did everything she wanted to do, split everything 50/50 and have shared so many wonderful memories. A wonderful trip to share before she heads back to Uni in a couple of weeks. 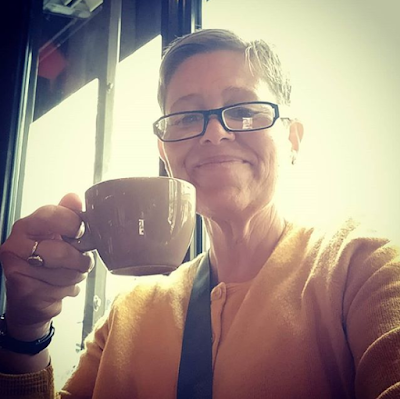 I will miss the coffee - was shocked at the price of my first cup 5euros 80! Thankfully those there after were cheaper. It was good coffee but not if it had all been at that price. 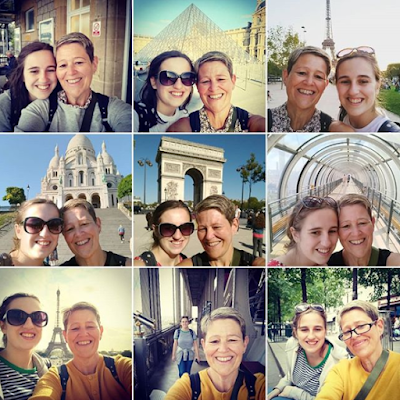 Thank you Sophie for a fabulous few days. 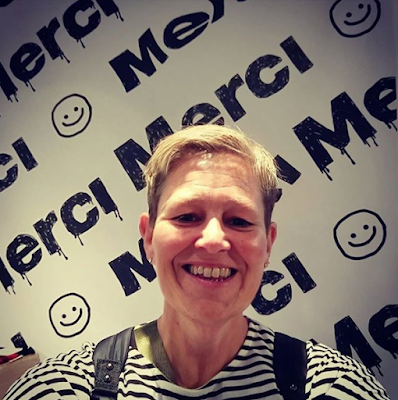 Thank you Paris for having us. 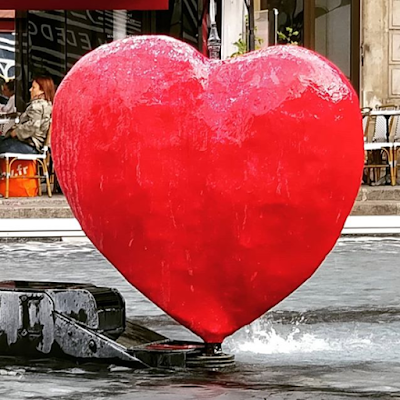 Wow, what a wonderful trip. Rog and I went to Paris for our honeymoon in May 1988, you have just taken me on a sentimental journey back there. We did everything that you have just done and went to all the same places. Thank you. x x x

ohhh what a beautiful trip! thanks for your photoes! I love PAris too

I last went to Paris in 1992 inter-railing, 27yrs ago - a lot is just how I remembered it to be but things like the Eiffel Tower had changed due to added security. I loved it, would go back. You'll have to go again Joy x

Would happily go back zzoe x